skip to main | skip to sidebar

Five WoW accounts, one keyboard broadcaster and me.

While I didn't like what I read about the paladin changes up front on MMO-Champion, I find that I am actually quite happy with the implementation. There were a bunch of things to note before I got from 'WTF?!' to 'Aaaah, cool!'. I'll list those below:

Hassle-free Blessings!
With Blessing of Wisdom folded into Blessing of Might and Blessing of Sanctuary's effect being talent based, this leaves two paladin blessings: Kings and Might. The kicker is that both are applied on everyone in your party/raid. That means a tankadin does Kings by default. A second paladin does Might. End of story. Combining that with minor glyphs reducing mana cost for Seal of Truth and Kings, we can be buffed up and running without drinking multiple times now! YAY!

AoE tanking changes!
So, they weakened Hammer of Righteousness (unless you have more than ten mobs around you) and put consecration on a longer cooldown. WTF?! Well, that's not so bad. Since they also buffed Holy Wrath and put it on a 15s cooldown. Between the shorter Hammer cooldown and Holy Wrath we are fine. We can throw in a consecration every half minute as well. Glyph for both Consecration and Holy Wrath and it feels like we have more AoE power than before. The AoE stun of Holy Wrath, applied to Undead, Demons, Dragonkin and Elementals is incredibly power- and useful. 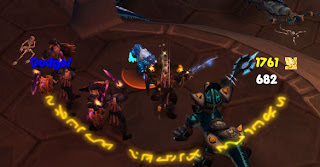 To ensure that I don't waste holy power generation, I installed Power Aura's Classic and set it up to show Holy Power clearly. I am amazed that Blizzard gave us a notice for Avenger's Shield but not for the critical Holy Power. But hey.
I put Shield of the Righteous and Avenger's Shield on Mouse Wheel Up and Down respectively, making one finger responsible for reacting to AS procs and full holy power.

I get 'how to' questions from people who start playing a paladin tank on a regular basis. Here are some of the re-occurring points:

Use Blessing of Sanctuary!

Kings may sound attractive, but Sanctuary is essential for mana returns. As of Patch 3.3, Sanctuary gives 10% Strength and Stamina, 3% less damage taken and 2% mana gained on block, parry and dodge. Compared to Kings, we loose 10% agility for 3% less damage and loads of mana. BoS is superior. If you can have two blessings, get Blessing of Might. If you can have three, get Kings as well.
Note: BoS is available from level 30 onwards. Use Kings before that.

Use Seal of Vengeance!

Seal of Vengeance is the proven superior seal to Righteousness and Command. It puts a stacking DoT up on anything you hit, and grants you 33% weapon damage as bonus as soon as your target has a full stack of 5. Also, when you use Hammer of the Righteous which hits 3 (or 4 with the glyph) targets, each of those gets the DoT.
The Glyph of Seal of Vengeance grants you 10 expertise. Expertise, not expertise rating. It takes you 26 expertise to be soft-capped and reduce a bosses chance to dodge or parry your hits by 5.6% each. 10 Expertise covers a lot of that without using item budget on gear and gives you a great advantage.
Note: SoV is available from level 64 onwards. Use Righteousness before that.

Divine Plea is used by holy and retribution paladins as a mana potion every minute. For protection paladins, it is used as a damage reduction and continuous mana gain. For that, you have to put two talent points into Guarded by the Light in the protection tree. Guarded by the Light reduces spell damage taken by 6% and refreshes Divine Plea each time you hit something. Add the 1 minute cooldown on divine plea, and you can have it active all the time while fighting. The Glyph of Divine Plea further makes Divine Plea attractive with a flat 3% reduction of all damage taken while Plea is active. So - get the talent, get the glph, use the Divine Plea before you pull.
Note: Divine Plea is learned at level 71. You'll have to wait if you are below that level.

This increase the threat generated by your spells by 80%. If something is running off unexpectedly to squash a damage dealer or healer, most likely you forgot to re-activate your Righteous Fury. It should always be active while you are tanking, unless you have an encounter  specific reason why you don't want this bonus threat.
Note: Learned at level 16.

The best threat a paladin can deliver results from a 9/6/9 rotation. This refers to using your five primary threat moves in an alternating sequence between short and long cooldowns. Short is six seconds, long is eight or nine seconds. Let's look at those abilities:


Hammer of the Righteous

This hits three (with glyph four) targets in front of you. This is extremely handy when picking up groups of mobs. A hit with this ability counts as a direct hit for Seal of Vengeance and will apply the SoV damage over time debuff to the target.
Cooldown: 6 seconds. Learned at level 60. 51 point protection talent.

Shield of the Righteous

Hits only one target, but hits it hard. Boring and straightforward compared to Hammer of the Righteous.
Cooldown: 6 seconds. Learned at level 75.

Holy shield does two things. It increase your chance to block an attack by 30%, which considering the chance to be missed, to parry, to dodge and the normal chance to block will result in no straight hits anymore. Since we are no longer dealing with crushing blows from bosses, this is less important today, but still a useful damage mitigation factor. It also deals damage to anyone who's attack you block.
Cooldown: 8 seconds. Learned at level 40, 31 point protection talent.

Judgement of Wisdom (or of Light)

This places a debuff on your target. Mana (or health) gain on hitting the target as well as the additional talented debuff from Judgements of the Just, which reduces the target's  melee attack speed by 20%. This is easily missed, but is a significant factor in damage reduction for tanks. All tank classes have an equivalent move, not using it means you are taking more damage than you should. I prefer Judgement of Wisdom for the mana returns, as do most mana-based raiders. Judgement of Light is less useful with the trickle of healing it provides not quite up to countering raid damage effects.
Cooldown 10 seconds. Can be reduced to 8 seconds with 2/2 Improved Judgements talent points. Should be reduced to 9 seconds with 1/2 Improved Judgement. The additional point doesn't provide a gain in threat since there is a short time gap in the 9/6/9 rotation anyway. Learned at level 12.

Places the quite visible paladin field on the ground. Any hostile mob in the field will take damage from it. This is useful, but can be problematic if some mobs are not supposed to be hit. It also requires a bit of foresight to avoid damage losses from having put down the field in the wrong place. So choose your tanking position first, pull with that and trigger happy dps and mind and put down the consecration field accordingly.
Cooldown 8 seconds. There is a glyph that makes it last 10 seconds, but this actually creates problems in the 9/6/9 rotation timing and is a bad glyph to use. Learned at level 20.
Posted by Stephanius at 3/28/2010 03:38:00 PM 2 comments:

The Looking For Dungeon tool is awesome. It highlights that there are more than three dps for each healer and tank and that there are fewer tanks than healers. Queue times for dps are measured in minutes, while tanks don't have any waiting time. As a consequence, there are many non-tanks exploring the option of off-spec tanking.

Anyone new to a role will face certain difficulties getting to know the ropes. Some are more obvious, others are quite obfuscated. I'll make an effort this weekend to provide some tips that should eliminate the most common mistakes and answer the most common questions.
Posted by Stephanius at 1/16/2010 04:56:00 PM 1 comment:

[Emblem of Frost] and [Emblem of Triumph] Shopping List

Badges have been reset. I updated my badge shopping overview with the new stuff.

Which Gems should I use as a tank?

I'll try to be short and precise here, but let me say something clearly first: equipping a tank is always about a balance of stats. It is never about all this or all that. For specific encounters one may swap a bunch of pieces or even prepare a full kit maxed out for one aspect, but for your bread and butter tanking, you do want a good balance.

I'll list the gems by socket colour and include the non-epic choice for budget gemming.

Blue Sockets are the easiest to fill. All tanks need stamina to build up their effective health.
[Solid Majestic Zircon] (30 sta) or [Solid Sky Sapphire] (24 sta).

Red Sockets are our second choice. Dodge (or Parry) plus Stamina improves Avoidance and Effective health at the same time without wasting any budget. Druid's benefit more from straight agility and can not parry, so avoid the Regal and Defender's cuts if your tank on all fours.
[Regal Dreadstone] (10 dodge+15 sta) or [Regal Twilight Opal] (8 dodge+8 sta).
[Defender's Dreadstone] (10 parry+15 sta) or [Defender's Twilight Opal] (8 parry + 12 sta).
[Shifting Dreadstone] (10 agi+15 sta) is the druid's choice.
[Delicate Cardinal Ruby] (20 agi) is a good alternative, especially for shared cat/bear gear pieces.

Yellow Sockets are a bit of a bother. Tanks usually do not need to gem for hit, expertise or crit, so we need to find a good use for those.
[Enduring Eye of Zul] (10 def+15 sta). Great for all plate tanks.
[Stalwart Monarch Topaz] As the plate tank budget alternative.
[Nightmare Tear] +10 all stats or [Enchanted Tear] +6 all stats are the bear's first choice for yellow sockets. I'll still need to see what to take next if needed.

What should I spent my badges on?

As this matrix below shows, you can get a 2xT8.25+2xT9.10 set without ever setting foot into a raid. Considering that not all equipment slots have an equal amount of item budget and that the item budget for head and chest is high, I'd recommend the following shopping list:

[Emblem of Conquest] (you can get about 50 per day)

Quite frequently I see someone ask for an Enchanter, Blacksmith or Jewelcrafter and am happy to help them out. As a tank, I am of course qutie partial to help out other tanks. Several times now I have had a look at a tank's gear, gems, enchants, talents via /inspect (and at their glyphs via the Armory) and asked them if they'd like a bit of advice. Since I play all four tank classes, I have pretty good visibility on what there is to know. =]

The overall response has been quite positive, and I am sure to have pointed a number of tanks into the right direction. I do note however that what I do actually tell each of these tanks happens to be virtually the same each time. For that reason I'll go and write down some of these things here. I'll make a deliberate effort to not write 'the mother of all guides' because there are lots of places already with those. I'll focus on a particular aspect and go for it.

What you see here is what I come across during a World of Warcraft Multi-Boxing experiment. Instead of playing one character - again - I play five characters at the same time. This is not a new idea, but new ground for me.

Please click here to see the Introduction to this Blog.